Friends, I have some exciting news to share. But first, you may have noticed a little different look and feel to Fun Without FODMAPs. I spent the last day giving the site a much-needed facelift.

The overall design of Fun Without FODMAPs hasn’t changed since I built it almost two years ago. So, I’m really excited about this change and I hope you are, too!

Now on to the even more exciting news, I’m thrilled to announce that I will be participating in a monthly challenge of talented (mostly dietitian) recipe developers known as The Recipe Redux.

The Recipe Redux was founded by a group of top-notch dietitians (Regan Jones, Serena Ball, and Deanna Segrave-Daly) to challenge healthy recipe developers to “take delicious dishes, keep them delicious, but make them better for you.” Each month there is a new theme and this month’s theme was Cookbook Love.

We were invited to select a recipe from a favorite cookbook falling on a page with any combination of 2-0-1-8 and revamp it to be a “healthier” version.

Defining healthy is relative and can have a different meaning to different people. For a frame of reference, the Recipe Redux definition of “healthy” aims to:

The cookbook I selected was a Betty Crocker Picture Cookbook from the 1950s. It was a well-loved gift from my grandma.

When I got married, I had suggested old cookbooks as a potential gift idea. My grandma, a strong-willed, inspiring, former lady boss, and lover of good food and adventures, unfortunately, passed away a few weeks prior, but not before deciding that this cookbook should come into my possession.

As I was paging through, it was only fitting to find a shopping list written in her classic cursive on an old envelope with the ingredients needed for Swedish Macaroon Tea Cakes found on page 208. I knew which recipe I was going to recreate.

Chef Google suggested that this recipe might be a variation of Mandelbiskvier (Almond Macaroons) or Mandel Kakor (Swedish Butter Cookies), but nothing really sounded like the recipe described in the cookbook. So, I have no idea if these cookie-tea-cake-kinda-things are actually Swedish (if you know, let me know), but they are delicious. 🙂

My number one priority on Fun Without FODMAPs is always to share low FODMAP recipes. Luckily, this recipe had pretty FODMAP-friendly ingredients to start out with. I did sub out the wheat flour (which, by the way, can be low FODMAP in small quantities) for a more FODMAP-friendly flour – my go-to: Bob’s Red Mill Gluten-Free 1:1 Baking Flour.

To err on the conservative (FODMAP) side, I reduced the amount of almond meal. Almonds are nutritious and delicious but can turn high FODMAP in larger quantities. I also passed on the almond extract, which hasn’t yet been tested by Monash.

To make this recipe a little healthier (an objective of the Recipe Redux), I added in my favorite baking veggie, pumpkin, in place of some of the called for butter. I also added in things like cinnamon and extra vanilla to help add flavor and compensate for some of the white sugar that I reduced from the recipe.

I made these for my family to try and they were a hit! As described above, these tea cake cookies do have a shortbread-like cookie crust that’s filled with a cinnamon-flavored almond paste. They’re sweet, but not overly sweet. They have a subtle pumpkin pie flavor, but they’re still buttery, tart-like, and delicious with coffee and I imagine, as the name implies, tea. 🙂

Almond Meal: A low FODMAP serving is ¼ cup or 24 grams.

Pecans: A low FODMAP serving is 10 pecans or 20 grams. 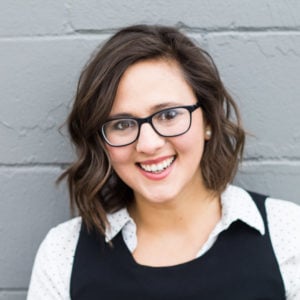 a FODMAP-trained Registered Dietitian living with IBS. I love creating easy low FODMAP recipes for you (and me)! Learn more